From the archives. ‘In the Meanwhile.’

Sometimes the answer to your prayer may be delayed due to battles going on in the spiritual realm. On the surface, it may seem as though God has not heard your prayer or in fact, answered them. However, as it was with Daniel, perhaps other things are stopping the answer from arriving.

The angel Gabriel immediately set out from God to bring the answer to Daniel’s prayer, but then we see that the angel encountered a problem.

For that reason, Gabriel was held up for twenty-one days in the heavenlies, and finally, he had to call on the Archangel Michael to hold back the principality so that he could get through with the answer to the prayer for Daniel. 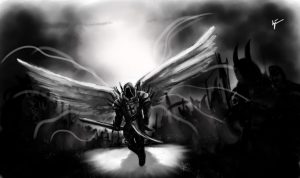 Once Gabriel had delivered the answer, he then had to fight his way through the prince of Persia again on the way out. Gabriel warned Daniel that the prince of Greece would come, the demonic principality having control over the region of Greece.

What if Daniel Complained About the Delay?

His situation was urgent, and the need was great, but the answer was held up for twenty-one days, for something that was needed now. Daniel had no idea what was happening.

It can happen like that for us. We may have been humble before God, and yet the answer to our prayer has not come. We know, from this scripture that it took twenty-one days for the answer to get through for Daniel.

Now let’s say that Daniel gave up believing that God would fulfill the covenant promises and meet all of Daniel’s needs. Imagine if Daniel gave up one minute before the twenty-first day was ended. What do you think would have happened?

Gabriel would have returned to God with the answer to the prayer, and Daniel would not have received it.

The Catholic Bible College: Enrol in the first two modules for free.

Growing global governance and religious intolerance, especially against Christians, is advancing at an alarming rate. If we add that to the neo-Gnosticism that has infiltrated the Church over the past 40 + years, the situation is grim.

Jesus asked, “if salt were to loose its flavor, with what can it be salted?”

In just two generations, the Judeo-Christian ethic, the salt that advanced Western civilization, has been all but removed from secular education, politics, and hence society. The result is that a formed moral conscience is replaced with relativism and individualism, and consequently, lawlessness, intolerance, and violence, the solution for which is an ever-growing rule by law and virtual police states on a global scale.

We cannot turn back the prophetic clock of the Book of Revelation and deny the signs and the nature of the spiritual warfare of the times. However, we can be as bold as Lions, and bravely present a clear alternative until Jesus returns; one that can be clearly seen and not just heard, although both are required for effective witness.

If you have carried a burden for these times, and sensed an urge to act, but have not yet known why or how, then you could have heard the calling of the Lord Jesus to become a new generation: A Joshua Generation; one that has a double portion of the Spirit as did Elisha and living with the boldness of Jeremiah.

Joshua, Son of Nun, took up the mantle of leadership of the Israelites at the time of Moses death. Joshua was a strong and courageous young leader who led God’s people fearlessly into the Promised Land…

“Now Joshua son of Nun was full of the spirit of wisdom, for Moses had laid his hands on him. So the people of Israel obeyed him and did everything just as the LORD had commanded Moses.” Deuteronomy 34:9.

You too, like Joshua, Elisha, and Jeremiah are to take up the mantle of leadership in your circle of life and join the ranks of the Warriors of Light, and like Saint Paul, be a witness to the Truth.